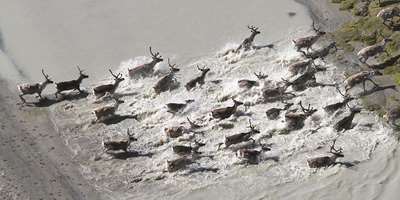 Reindeer in the Snæfellöræfi Wilderness

Landsvirkjun has conducted yearly monitoring on reindeer numbers within the affected area of the Kárahnjúkar Hydropower Project (in the area north of the Brúarjökull Glacier) since 1993 and in the area to the east of Snæfell since 2003. The Engineering Institute of the University of Iceland has recorded these numbers via aerial photography in an area covering 400 km2. Monitoring has also been conducted in reindeer calving areas in the Snæfellsöræfi wilderness in cooperation with the East Iceland Natural History Institute.

The objective of monitoring is to assess the condition of the reindeer population and to compare the effects of construction and increased traffic within the area with the results of the environmental impact assessment already conducted. Reindeer numbers and the monitoring of calving areas are carried out annually during and after the calving season in the springtime.

Counts conducted in previous years show that the number and location of reindeer is dependent on the presence of snow cover in the area; the more snow cover, the later the reindeer enter the area. Calving seems to take place in more lowland areas where there is less snow and better access to grazing land.

The East Iceland Natural History Institute is responsible for the annual monitoring of reindeer calving areas in the Snæfellsöræfi wilderness area, Brúardalir and in the southern area of Fljótsdalsheiði. Monitoring is carried out to assess if and how power station construction in the area has affected calving as well as the choice of calving area, calving periods and calf numbers.

In 2013, a report was released on monitoring results from calving areas in 2012. The main results were as follows:

These trends are similar to those of the last few years when the distribution of animals between Suðursveit and Vopnafjörður is considered. At the turn of the last century, reindeer left the Vesturöræfi area early and fewer animals entered the area during the calving and summer grazing period. In addition to conventional variables between years, the behaviour of the reindeer is difficult to assess but the population seems to be growing in the east (Suðurfirðir) and in the north (Vopnafjörður heathland area). More information can be found on the homepage of the Alcoa and Landsvirkjun Sustainability Initiative.

Calving areas and the distribution of reindeer in 2012

Number of females, year old and calves during the calving period and summer count period