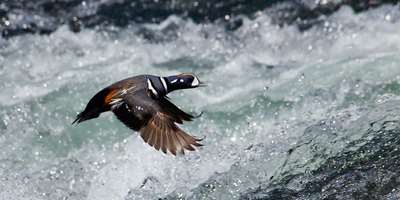 Landsvirkjun monitors birdlife in all the affected areas of its power stations. Monitoring includes observing and counting of certain bird species, bird pairs, young, eggs and nests. The objective is to assess if and how Landsvirkjun’s operations affect bird numbers and their distribution.

Water was channelled from Jökulsá á Dal into Lagarfljót when the Fljótsdalur Hydropower Station began operations in 2007. The environmental impact assessment and experts at the East Iceland Natural History Institute in the eastern part of Iceland advised Landsvirkjun to focus initially on monitoring the Long-tailed duck species in Lagarfljót. Data collected by the East Iceland Natural History Institute (since 1989) on other bird species proved useful in explaining the variances in the Long-tailed duck population. Landsvirkjun extended monitoring to other duck species in the area to gain more insight into the development of birdlife in the area.

The affected area of the Fljótsdalur Hydropower Station

Fluctuations in the number of birds have been evident in Lagarfljót. The decrease between years (2005 and 2012) seems to be unusually prolonged. Increased turbidity in Lagarfljót is believed to diminish feeding conditions in the river. Ongoing monitoring on birdlife in the area is therefore important.

The Long-tailed duck in Lagarfljót

Developments in the Long-tailed duck population in Lagarfljót between 2005 and 2013. Numbers are recorded four to six times during the summer period.

The Long-tailed duck, the Tufted duck and the Mallard in Lagarfljót

Changes to the largest population of Long-tailed duck and Tufted duck in the spring period and to the Mallard during the winter period in Lagarfljót.

Landsvirkjun has monitored the possible effects of water transport from Jökulsá á Dal to Lagarfljót on the density of Great skua nests in the area. The main nesting area for the bird species in the eastern part of Iceland is in Úthérað. Monitoring on the Great skua was conducted in 2012 and 2013 and the main results were as follows:

Monitoring on the Pink-footed goose

Monitoring on the Pink-footed goose was conducted in 2012 and 2013 and the results were as follows:

The count area, according to the Centre of Natural History (in the eastern part of Iceland)

Hafrakvammar, Hrafnkelsdalur and the surrounding valleys were researched between 1981 and 2010 but data from Vesturöræfi is from 1981-2013.

Flying with the Pink-footed goose

Two Pink-footed geese were caught in the summer of 2013 in the vicinity of Hálslón and small electric tags were attached to them. The location devices are powered by solar batteries and researchers can check their location at any given time.

The geese were given the names Hörður and Úlfar and they left their nests in the nesting area by Hálslón during a sleet storm during the autumn, beginning their long flight to the British Isles. The geese have been monitored since then and they returned to Iceland in April, after spending the winter in England and Scotland.

The objective of the research is to assess the migration patterns of the Pink-footed goose. The project is funded by Landsvirkjun, Scottish National Heritage, the Wildfowl and Wetlands Trust (WWT), the Centre of Natural History in the eastern part of Iceland, the Vatnajökull National Park and Toyota in Iceland. More information on Hörður and Úlfar’s travels can be accessed at: telemetry.wikispaces.com/pinkfeet.