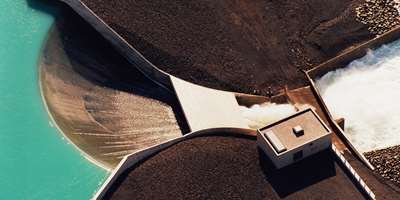 Landsvirkjun’s Environmental Management System is defined in the following manner: Firstly, the Company’s operations are divided into electricity generation in five operational areas at the Company’s power stations; Blanda Station and Laxá Station, Fljótsdalur Station, the Mývatn area, the Sog area and the Þjórsá area. Secondly, other operations include the Energy Division, the Research and Development Division, the Project Planning and Construction Division and the Company’s offices in Reykjavík and Akureyri.

Energy losses and Landsvirkjun’s own energy consumption was 131 GWh in 2013. A large percentage of this is due to the power stations’ own consumption. Detailed figures on Landsvirkjun’s electricity generation and energy losses throughout the year can be seen in the numerical data section.